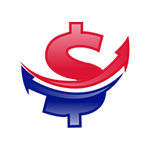 I love this story! It's from a website that I recently found and actually really like called ReclaimTheNet. Honestly, it seems to have a mission very similar to my own, although I am not focused solely on the Internet. I want a Parallel Economy for literally everything. Nothing would make me happier than to live in a world where not a single dollar I spend will end up in the hands of one of these censoring / BLM supporting communists either online or offline.

Anyway, apparently Rumble has built their own advertising marketplace. I actually asked Dan Bongino if he was building an ad network for one of his weekly questions on the podcast, but he didn't pick my question 😭😭😭. It sounds like Rumble is building out a Parallel Economy version of Google's Adsense and I think it's freaking awesome! Here's a snippet from the article. As always, click the link below to read the whole thing:

'Free speech-focused video sharing platform Rumble has revealed that a significant portion of its ad inventory has been moved away from public ad exchanges and into an alpha version of the company’s own advertising marketplace.

Rumble CEO Chris Pavlovski added that current exchanges are “enormously susceptible to cancel culture pressure” and that Rumble’s goal is to “build a transparent advertising eco-system for creators, publishers, and advertisers that is immune to cancel culture.”

The advertising marketplace will be rolled out in stages during 2022 and the company ultimately plans to run all ads through its own system. Its features will include real-time bidding, extensive targeting, and the ability for publishers to participate and list their websites in the exchange.'

2
View All
0
Reply
Interested? Want to learn more about the community?
What else you may like…
Videos
Podcasts
Posts
Articles
Live Streamed on January 24, 2023 10:04 PM ET

Just testing out my new camera... Nothing super important. ;-) I bought a new camera for Christmas and wanted to see if I could get it working on a live stream.

I saw a tweet this morning that really opened my eyes to something that not enough people are talking about that is related to this FTX scandal. In this video I give a little bit of backstory for anyone who isn’t following the FTX situation, and then dive into what this tweet said and my thoughts about it.

Just hopping on to talk about the latest news regarding the months-long purchase process of Twitter by Elon Musk.

This is actually a big deal. All the apps that are currently being essentially prevented from existing by Google and Apple are unable to bypass #BigTech because they can't get on the app stores. However, it appears that the government is set to mandate that these two tech giants allow third-party app stores on their operating systems. This could be HUGE news for the #ParallelEconomy! !

A new report from the US government has called for lawmakers and agencies to compel changes to both Apple and Google's mobile platforms, deeming the tech firms' current practices to be harmful to competition and consumers.

In 2021, President Biden issued an Executive Order on Competition around this subject, with the US Department of Commerce's National Telecommunications and Information Administration publishing its findings yesterday.

Spotted by MobileGamer.biz, the report says the current policies on iOS and Android not only harm developers, but also impact consumers "by inflating prices and reducing ...

ParallelEconomies.com@ParallelEconomy
February 04, 2023
AI Triggering Mass Layoffs. Are You Ready for the Parallel Economy?

“As Microsoft invests $10B into artificial intelligence company, OpenAI, experts are warning that AI will steal 20% of all jobs in the next five years. But as we are being ushered into a digital technocracy, a massive parallel economy is emerging. Join me for an economic update with Dr. Kirk Elliott PhD.” 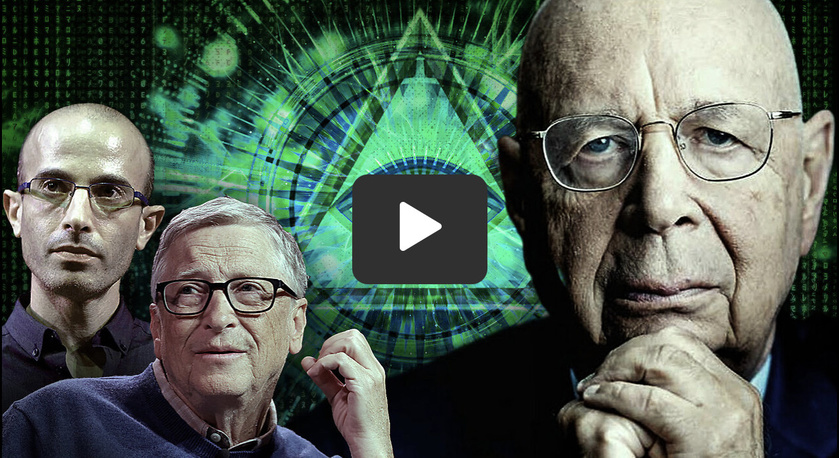 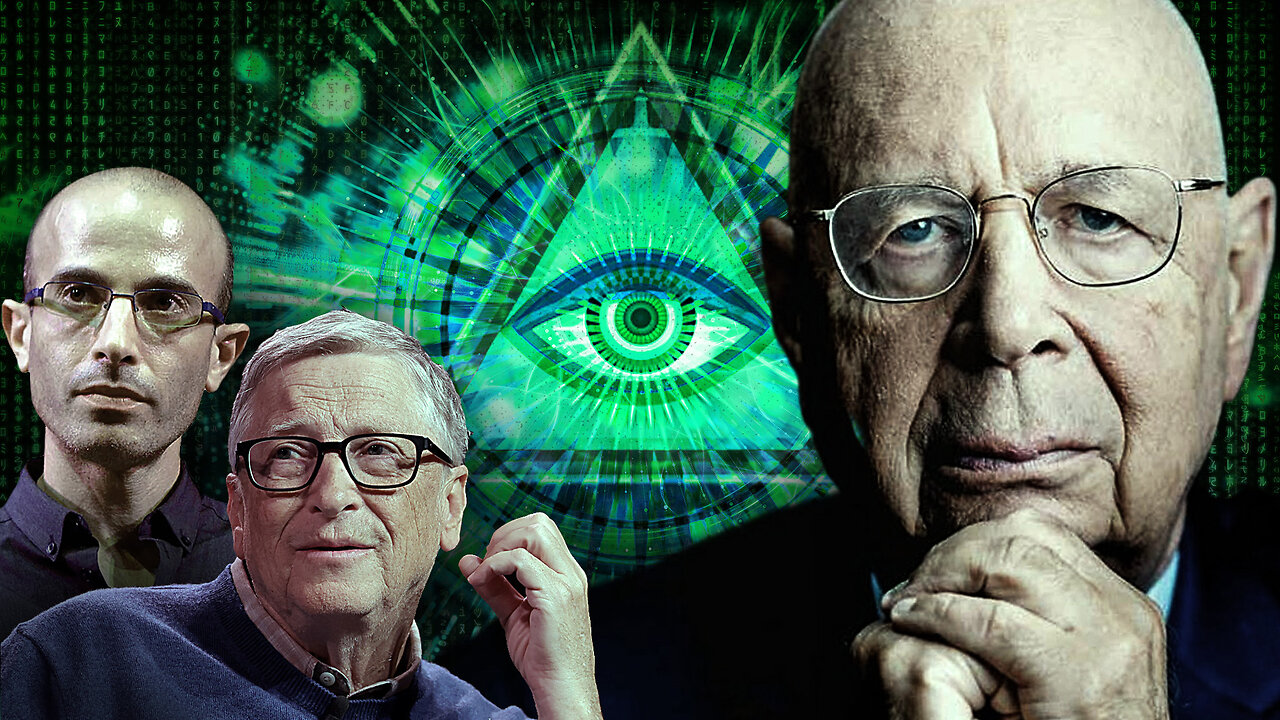 Billionaire tech mogul, SpaceX founder, and Tesla CEO Elon Musk is reportedly moving forward with plans to make his recent acquisition, social media platform Twitter, a payments processor like Paypal, Cash App, and Venmo. The move may be connected to Musk’s previously stated interest in a so-called “everything app” that would comprehensively incorporate shopping, payments, and social media.

According to a Monday report by The Financial Times, Musk’s Twitter has already started the process of developing software and applying for regulatory licenses to add the payments component to the platform.

The outlet cited “two people familiar with the company’s plans,” who said that Twitter has starting applying for state licenses after filing to be a payments processor with the U.S. Treasury in November.

Musk could be making the move in a bid to restore lost revenue as marketers pull away from Twitter over concerns regarding its new “management and content moderation,” the ... 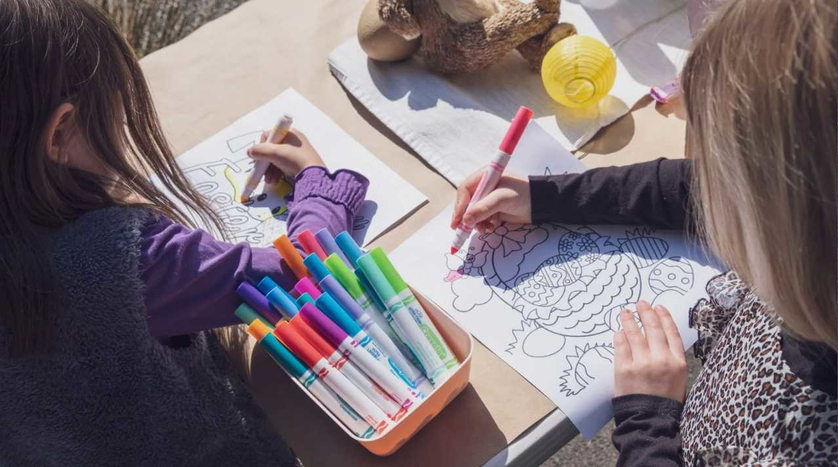 PayPal shuts account of group who fought to keep schools open during pandemic
Another casualty of the recent PayPal purge.

UsForThem, a UK parents’ group that campaigned to keep schools open during the pandemic, has been banned from PayPal because of “the nature of its activities.” The group says that after the ban, it is unable to access thousands of pounds in donations. 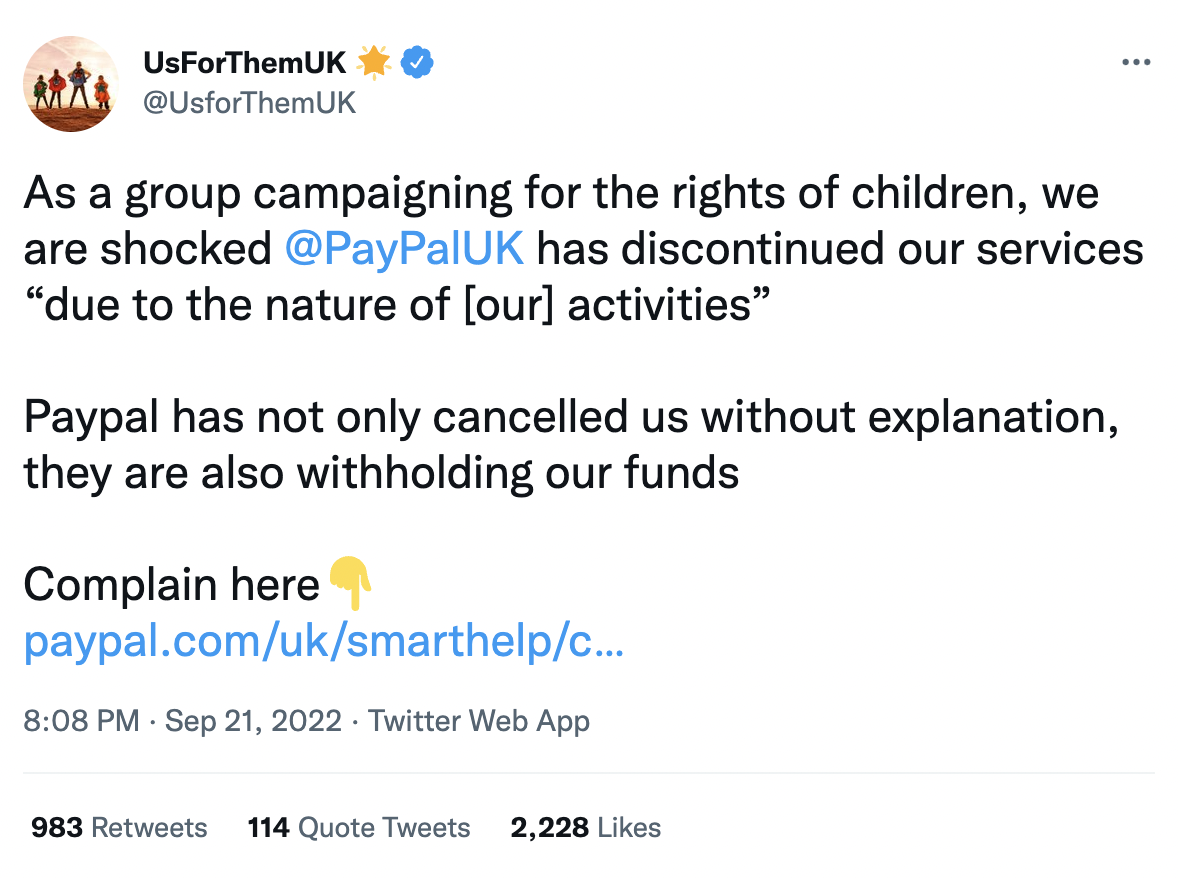 “We were completely taken aback to learn that PayPal was discontinuing our services ‘due to the nature of [our] activities’. No prior warning or meaningful explanation was given, and despite them saying we could withdraw our remaining balance, we cannot,” said the group’s co-founder Molly Kingsley to The Telegraph.

“UsForThem has only ever been fully transparent about the organization’s aims, and our mission statement is on a prominent page of our website for all to read. That makes clear that our core focus is campaigning for children to be prioritized in public decision-making.

“If something about that mission offends PayPal, why could they not be transparent about that? For a small volunteer organization, this has a significant impact on our ability to operate, as presumably was intended.

“It is extremely hard not to draw the conclusion that this is a politically motivated cancellation of an organization that in some way offends PayPal.”

Read full Article
4
View All
0
Reply
See More
Sign Up To Parallel Economies
Sign Up for free to see more from this community or subscribe to Parallel Economies for $2/month to support Noah Davis for more interaction and exclusive content.
Login Signup
Available Now

29
View All
7
Reply
Don’t have a Locals account yet? SIGN UP
I’m already a member Log in
Please keep this window open while your file is uploading...